By Merkaba Molly on

As a psychic medium and angel communicator, I have learned that following my guides suggestions tends to work in mysterious ways. Here I share a funny story of how I was invited to appear on Soulogy Soulspeaks 5D.

One rainy Sunday at the start of July I was sitting on my couch and thought to myself, how shall I promote my work as a psychic medium and energy healer? I went to Google and started typing. I looked at the computer screen and saw that I had automatically typed ‘how to publish your story’.

I am a Divine channel and one way I do this is by writing, so I wasn’t that surprised my typing wasn’t what I intended but a message from my guides.

This message about writing my story is not a new one – I’ve been receiving this guidance for years, however I was getting the feeling that NOW is the time to do this.

I was being asked to share stories about my spiritual path as teachings of shared experiences. This would help many people who are waking up to spirituality right now.

So over the next few days I began thinking about how I would format my writings. Then one morning I was in a queue at the supermarket and the woman in front of me had a tattoo on her shoulders: “Maybe it’s not about the happy ending. Maybe it’s about the story.” Another prompt! That afternoon I sat down at the computer and started writing.

I began typing my journal entries from the past year. I thought this would be a good way to collate my stories on the computer. What happened, though, is that I relived experiences and this brought up heavy emotions. I closed my laptop and paid attention to these feelings.

A week passed by and I was inspired to write a blog post about my throat chakra healing, which occurred in the most peculiar way (read it here). I shared this blog on my social media and posted it in the Soulogy Facebook group, thinking someone there might be interested.

Next day I was guided to write about my feelings. I wrote a blog about my emotions rising up from typing my journal (read it here) and again shared it in the Soulogy group.

On the third day I got an email from Soulogy inviting me to be a guest on Soulspeaks 5D. I was in shock! I had never expected or thought that would happen – I was just following my inner guidance without any expectation of what would result.

I was feeling nervous about this opportunity and checked in with my guides. They were pushing me forward, telling me to be my authentic self, to share myself as the spiritual teacher that I am. I decided I would do the show and be as authentic as possible. 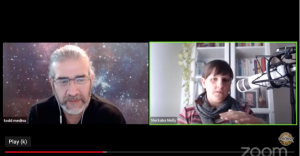 I’ll be honest, I was very nervous and it took me quite some time to calm down afterwards. I had stepped out of my comfort zone, which was uncomfortable, but that is where the growth can be found. It helps that the response from viewers was affirming – my story resonated and they were fully supportive and thankful for my appearance on the show.

Now I look back and thank my guides for pushing me forward. And how funny is it that the first blog post I shared to the Soulogy group was about my throat chakra healing? I guess it was all part of the Divine plan.

Another plus is that just before the show my spirit team revealed to me their new name: the Star Team. At first I realised the galactic reference, but it was only later that I got the full joke – they are now stars because we’ve been on YouTube together!